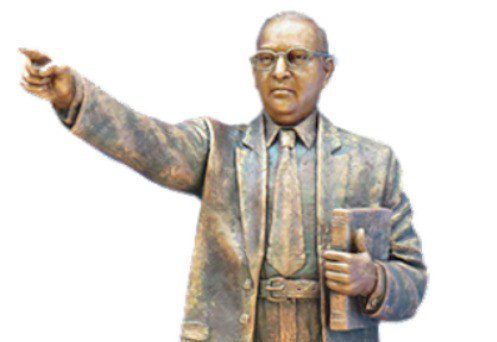 A STATUE outside a Buddhist temple in Wolverhampton depicting one of the religion’s most influential social reformers is to be replaced with an updated model of the former activist, reports Joe Sweeney.

An application to erect a reconditioned model of Dr Bhimrao Ramji Ambedkar at the entrance to the Buddha Vihara in upper Zoar Street, Graiseley, has been submitted to the city council.

If given the go-ahead, a new pedestal and statue of Dr Ambedkar – an Indian jurist, economist and political leader – will be installed one year after the 130th celebration of his birth.

The original statue was unveiled in October 2000 by councillor Tersaim Singh (Lab. Blakenhall) who was mayor at the time, and shows Dr Ambedkar teaching and holding a copy of his book Buddha and his Dhamma.

Planning permission for the building of the temple was first granted in 1989 with approval for an adjoining community hall following in 1997.

Proposals for the new updated statue, which shows Dr Ambedkar with his right arm extended, have been made by Mr Madanlal Chauhan on behalf of the local Buddhist community.

A long-term campaigner for people’s rights, Dr Ambedkar trained in law at Grays Inn in London from 1916-21. He later fought for India’s independence and converted to Buddhism in 1956 shortly before his death.

Council planners look set to approve the proposal in the near future.