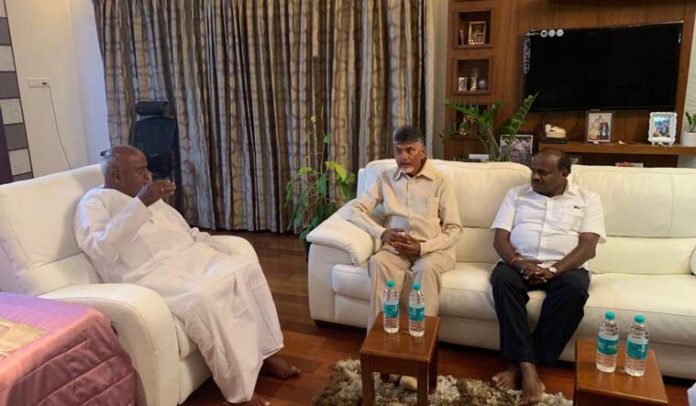 Confabulating with Gowda for over an hour in Bengaluru late on Tuesday night after a meeting of opposition parties in New Delhi on the EVM issue earlier in the day, Naidu said 23 parties were raising the issue and demanding transparency and accountability.

“Earlier, even the BJP had opposed EVMs,” he said. “In Uttar Pradesh, we are seeing EVMs in hotels and homes… strong rooms are being changed,” Naidu alleged.

Asked about Prime Minister Narendra Modi attacking the bogey of EVM raised by the opposition, Naidu said, “Why is the PM opposing? There is EVM and VVPAT. You have spent Rs 9,000 crore… Why are you not showing transparency and accountability?”

“This means you are doing mischief. You are manipulating EVMs,” Naidu alleged.

Gowda said he too had written about the EVMs to the Election Commission in 2006 itself and added that he felt ballot papers should be brought back to avoid these complications.

Already locked in a battle with the EC over the reliability of the EVMs, the opposition parties have pressed for their demand of increasing the tallying of the paper trail of votes (VVPATs) with EVM figures and have submitted a memorandum to the poll panel in New Delhi.

In the memorandum, leaders of 22 opposition parties—including the Congress, DMK, TDP and the BSP—have demanded that verification of VVPAT slips of randomly identified five polling stations in an assembly segment should be done prior to the initiation of counting of votes and not after the completion of the last round of counting.

Asked about the prime ministerial candidate of the opposition in the event of anti-BJP parties getting the numbers, Naidu said, “We will sit together and discuss the PM candidate after the results on May 23.”

On the JD(S) backing Congress president Rahul Gandhi for the top post, Naidu said, “There was nothing wrong with it. (However) We will sit together and decide.”