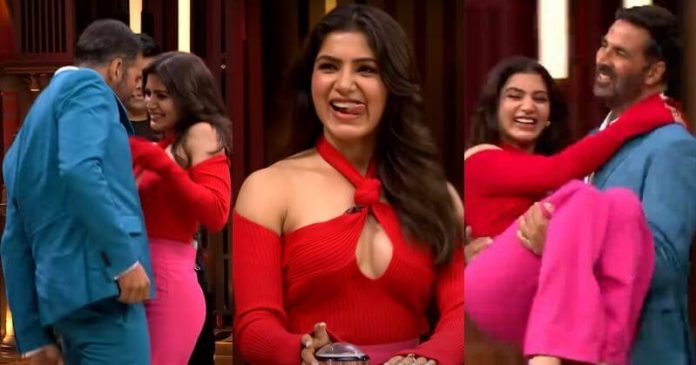 Hosted by filmmaker Karan Johar, Koffee With Karan Season 7 has started with a bang! The seventh season of the show has taken a detour from its television premiere and currently streams on Disney+ Hotstar.

After two sizzling episodes, Koffee With Karan Season 7 will soon be airing its third episode featuring Bollywood superstar Akshay Kumar and southern sensation Samantha Ruth Prabhu. While Khiladi Kumar has previously appeared on the show, the ‘O Antava’ actress will be making her debut on the show.

KJo has shared the trailer for the new episode of his chat show, where Kumar is seen picking up Samantha in his arms as they make an awe-worthy entry. Later, the two do some dirty dancing as well.

Sharing the video, Karan Johar wrote, “Heart of gold and a dash of sexy & bold – my two new guests on the Koffee couch are bringing the heat this Thursday in an all-new episode of Hotstar Specials Koffee With Karan S7 only on Disney+ Hotstar.”

Samantha wears a pink and red outfit while Akshay wore a blue suit. As they take the couch, Karan mentions how Samantha and Akshay are the leading, most successful actors in India. Samantha said that she did not mind being carried in by Akshay.

For the uninitiated, Samantha was married to actor Chaitanya Akkineni. They announced divorce last year.

In another segment, the filmmaker also asks Akshay what he would have done if comedian Chris Rock had joked about his wife, Twinkle Khanna. Akshay said, “I would pay for his funeral.”

Koffee With Karan Season 7 started streaming on Disney+ Hotstar on July 7. Alia Bhatt and Ranveer Singh were part of the inaugural episode while Sara Ali Khan and Janhvi Kapoor appeared as guests on the second.

Other celebrities set to appear on the show are Shahid Kapoor-Kiara Advani, Kriti Sanon-Tiger Shroff, and Vijay Deverakonda-Ananya Pandey.