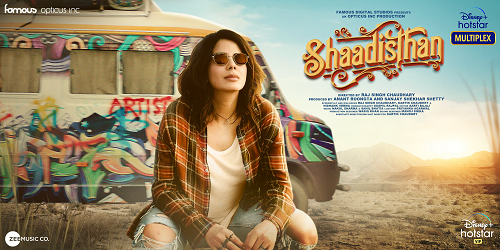 Last seen in Netflix’s The Girl On The Train (2021), actress Kirti Kulhari is now looking forward to the release of her next film Shaadisthan. The actress on Wednesday announced that her film is set to have a digital release on leading streaming media giant Disney+ Hotstar.

The announcement was accompanied by a poster featuring her protagonist, Sasha. Describing her as the “coolest” and “most sorted,” the actress wrote on her Instagram handle, “Meet Sasha, the coolest and the most sorted person I have ever met in my life, on-screen and off-screen. She is cool as a cucumber and hot as fire. She is an artist all the way and a human all the way.”

In the poster, Kulhari looks cool and casual in a red checkered shirt over a white tee teamed with ripped blue denims. A vehicle with ‘Artist’ written on its back can be seen in the backdrop.

The description suggests that Shaadisthan is a light-hearted drama, a departure from Kirti Kulhari’s recent heavy-duty projects like Criminal Justice: Behind Closed Doors (2020) and The Girl on the Train.

In addition to Shaadisthan, Kirti Kulhari has several other interesting projects at various stages of development. She returns to reprise her role in the next season of her hugely popular Amazon Prime Video show, Four More Shots Please! She also headlines Disney+ Hotstar’s upcoming medical thriller series Human, directed by Vipul Amrutlal Shah and Mozez Singh.

Inspired by true events so harrowing that it shook the whole nation, Human is expected to start streaming in the last quarter of 2021.