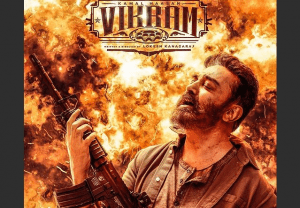 Multiple award-winning actor Kamal Haasan’s much-awaited film Vikram has locked an official date for its theatrical release. The Tamil-language action drama, which was earlier supposed to release in March, will now enter cinemas on June 3.

Haasan, who also produces the film under his production house, Raaj Kamal Films International, announced the release date of the film on Twitter. “I am waiting with bated breath for our Vikram to release world over, in theatres on June 3rd, 2022,” wrote the veteran actor.

He also shared a behind-the-scenes video from the shoot, which provides a glimpse of the massive scale of the film. If the BTS video of Vikram is anything to go by, it seems Haasan has a promising action thriller on his hands.

Billed as a high-octane action drama, Vikram has been directed by Lokesh Kanagaraj. In addition to Haasan, the film also stars Vijay Sethupathi and Fahadh Faasil in important roles. The team wrapped up filming on March 2.

Haasan, who had started filming for Vikram last July, in February, exited the reality TV series Bigg Boss Ultimate as its host owing to scheduling conflicts with the film.