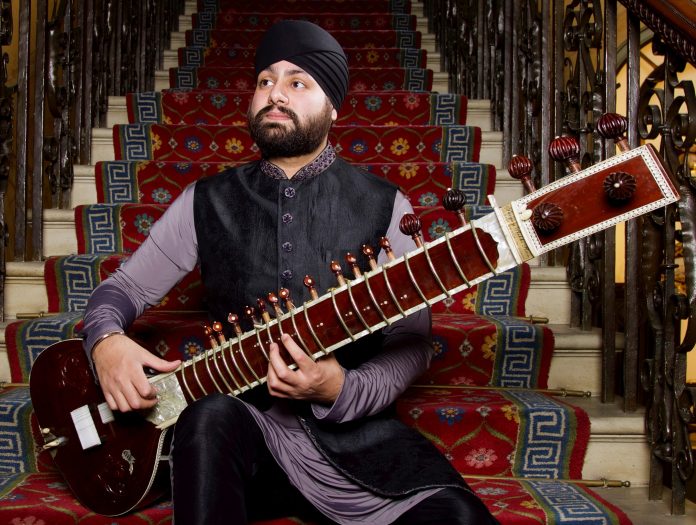 The award-winning sitar virtuoso’s dynamic debut combines classical compositions rooted in Indian tradition with a contemporary flair, which showcase his exceptional musicality and ability to effortlessly connect with cross-generational listeners. The 12-track release featuring powerful collaborations with leading lights in classical music is a giant first step from a bright newcomer, who has been connected to music from a very young age and has an exciting journey ahead.

Eastern Eye caught up with the Leeds-based maestro to discuss his new album, future plans, and importance of keeping the classic tradition alive.

What first connected you to music?
I don’t come from a musical family so my first interaction with music was probably hearing kirtan (religious hymns) at the local Gurdwara. My primary school in North Leeds offered Indian classical singing lessons as part of the music curriculum, so I remember joining that at a young age. I really enjoyed the lessons and would stay longer in the music room after classes had finished. I have no idea what drew me to music, but when I heard it, I knew this would be something I wanted to pursue.

What drew you towards the sitar?
I started learning sitar at a relatively late age. I started off learning Indian classical vocals and was very active in Leeds music circles. I used to perform at school, at the local Gurdwara, I took part in the SAA-UK Summer Schools, and used to learn at the Leeds College of Music Saturday and Sunday schools. I joined the National Youth Orchestra (Samyo) when I was around 14/15 years old as the first vocalist. Seeing other young musicians there inspired me to take up the sitar and did that with my teacher Ustad Dharambir Singh MBE.

You have done a lot at a young age. What has been the most memorable moment of your musical journey?
There have been countless memorable moments but the biggest has to be performing in the ballroom at Buckingham Palace for Prince Harry as part of a BBC documentary when I was 18. Another memorable moment was recently performing at Westminster Abbey in the presence of the whole royal family and the prime minster as part of the Commonwealth service.

Tell us about your debut album Anomaly?
Anomaly is a contemporary classical album featuring 33 musicians, including greats like Nitin Sawhney, Roopa Panesar, and Pirashanna Thevarajah. I received a much-coveted Sky Academy Scholarship in 2016 to work on the album and wanted to feature as many Britishborn Indian classical musicians as I could. It is a contemporary album but rooted wholeheartedly in Indian classical music.

Where did you draw inspirations from for the compositions?
Each track on the album is an ‘anomaly’ within itself. I draw from all of my varied influences but mainly from Indian classical (both Hindustani and Carnatic) and western classical music.

Which is your own favourite track in the album?
Every track is a part of me, so it’s difficult to choose!

Do you think more people need to be made aware of the fact there are worldclass south Asian classical musicians in UK?
Yes, for sure! The UK has been blessed with many senior Indian classical musicians who have supported and taught music in this country for many years. My teacher Ustad Dharambir Singh MBE set up and had a hand in setting up loads of Indian classical organisations, such as SAA-UK, SAMYO and Tarang, and the Darbar Festival, which facilitate and propagate Indian classical music and its musicians in this country. We are blessed to have fine British-born musicians such as Roopa Panesar, Soumik Datta, Pirashanna Thevarajah, Kirpal Panesar, Kaviraj Singh, Shahbaz Hussain, Bhupinder Chaggar and more, who are all world class. And these are just naming a handful!

What is the music plan going forward?
My plan is to continue practising and making music I enjoy, with the grace and blessings of all my teachers and the almighty.

Who is your own musical hero?
There are so many to choose from, but it is probably Kaushiki Chakrabarty, my all-time favourite musician.

Why is it important to keep Indian classical tradition alive?
There is so much beauty inherent in our system of classical music. Although based on the strict rules of raag and taal, the performance of Indian classical music is 90 per cent improvised on the spot. That means that every concert is different each time and the magic created by the spontaneity of the musician is something to behold.

Why should we pick up your new album?
I am very lucky to have been signed by such a prestigious and world class label, Real World Records. It’s not very often that this happens for a British born classical musician from a Sikh background. Support from the British Asian community is very appreciated!

Anomaly by Jasdeep Singh Degun is available now on Real World Records. Catch him live at Kings Place in London May 14, Curve Theatre in Leicester July 17, Sage in Gateshead on July 22, and Womad Festival on July 31.