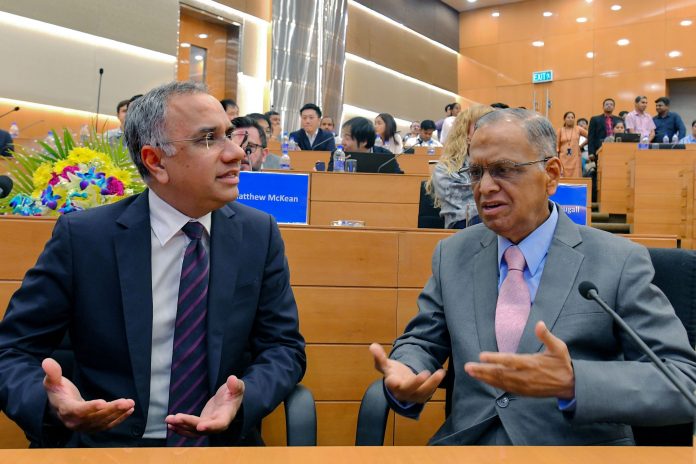 Indian software giant Infosys said on Wednesday it was ‘transitioning’ out of the Russian market following the Ukraine war and conflict of interest accusations levelled at Rishi Sunak, the British chancellor.

Sunak’s wife Akshata Murty holds a nearly $1 billion stake in the IT firm, which was founded by her father NR Narayana Murthy and established itself as a global outsourcing behemoth.

Critics have accused Sunak of financially benefiting from Infosys operations in Russia through his wife’s stake, even in the wake of stiff British sanctions against Moscow in response to the invasion of Ukraine.

“Given what is going on in the region, we have started to transition all of our work from our centres in Russia to our centres outside Russia,” chief executive and managing director Salil Parekh told a media briefing.

Parekh said the company was ‘very concerned’ about the situation in Ukraine and had committed $1 million in humanitarian aid.

But he declined to confirm if the company’s board has discussed recent criticism surrounding Murty’s stake in the company.

“We have no comments to make on any individual shareholder,” he said.

Infosys also announced quarterly earnings on Wednesday but fell short of analyst estimates despite strong growth on the back of sustained demand for digital services since the pandemic.

Net profit at the Bangalore-headquartered company rose 12 per cent on-year to 56.86 billion rupees ($746 million) in the March quarter.

Revenue growth was forecast at 13-15 per cent for the current financial year, after the company recorded an order book of $9.5 billion for the year to March 31.

Infosys was at the forefront of an outsourcing boom that saw India become a back office to the world as Western firms subcontracted work to a skilled English-speaking workforce.

More than 60 per cent of its revenue comes from North American markets.

The company’s board approved a final dividend of 16 rupees per share. Its stock closed 0.41 per cent higher in Mumbai ahead of the earnings announcement.