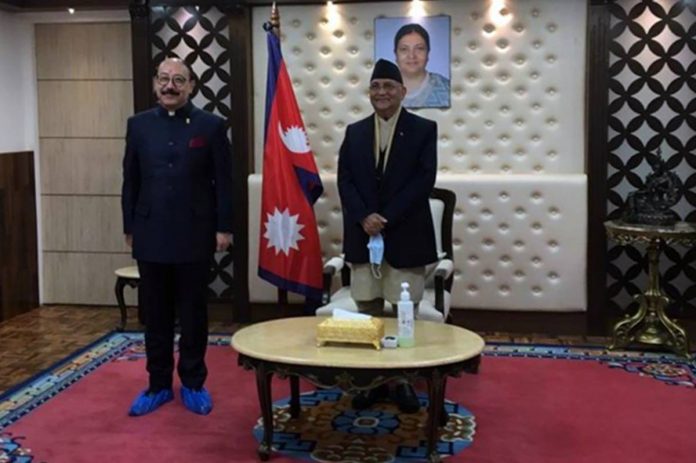 Shringla began his two-day official visit to the Himalayan nation on Thursday.

He was accorded a warm welcome on his maiden visit to Nepal, which comes in the backdrop of strained relations between the two countries following a bitter border row.

“I have wanted to come here earlier also, but because of COVID-19 I couldn’t do so. I am very happy to be here. I was here in Kathmandu earlier too, though this is my first visit to Nepal as a Foreign Secretary. We have very strong relationship. Our endeavour will be to see how we can take that relationship forward,” Shringla told reporters on his arrival at Tribhuvan International in Kathmandu.

Shringla’s visit will be a continuation of the regular exchange of high-level visits between the two friendly neighbours, the Nepalese Foreign Ministry said in a statement this week.

He will also hand over COVID-19-related support to the Government of Nepal before wrapping up his two-day visit on Friday.

Earlier this month, Indian Army chief Gen. M M Naravane travelled to Nepal on a three-day visit during which he held talks with Nepal’s top leadership and discussed bilateral relations.

The ties between the two countries came under strain after Defence Minister Rajnath Singh inaugurated an 80-km-long strategically crucial road connecting the Lipulekh pass with Dharchula in Uttarakhand on May 8.

Nepal protested the inauguration of the road claiming that it passed through its territory.

Days later, Nepal came out with the new map showing Lipulekh, Kalapani and Limpiyadhura as its territories.

After Nepal released the map, India reacted sharply, calling it a “unilateral act” and cautioning Kathmandu that such “artificial enlargement” of territorial claims will not be acceptable to it.

Meanwhile, Chinese Defence Minister Gen. Wei Fenghe is scheduled to visit Nepal shortly after Shringla returns home. Wei is likely to arrive here on Sunday on a four-day official visit, though the date of the trip is yet to be officially announce