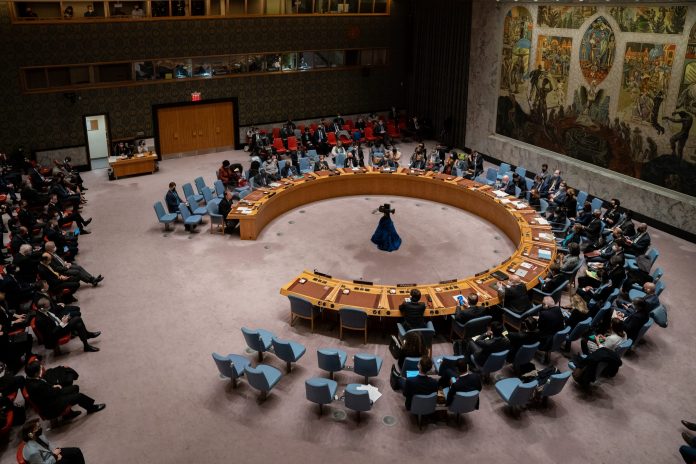 INDIA abstained on a US-sponsored UN Security Council resolution that condemned Russia’s “aggression” against Ukraine and demanded “immediate, complete and unconditional” withdrawal of Russian forces from the neighbouring country.

The UN Security Council voted on Friday (25) on the draft resolution sponsored by the US and Albania and supported by several other nations including Poland, Italy, Germany, Estonia, Luxembourg and New Zealand.

Eleven countries voted in favour of the resolution while three countries – India, China and the UAE abstained.

A permanent member of the Security Council, Russia used its veto power blocking the resolution, as expected, but Western nations said the resolution seeks to show Moscow’s isolation on the global stage for its invasion and actions against Ukraine.

All eyes were on how India will cast its vote on the resolution given that New Delhi has strong defence ties with Moscow.

During a telephone conversation with Russian president Vladimir Putin on Thursday (24), prime minister Narendra Modi “appealed for an immediate cessation of violence, and called for concerted efforts from all sides to return to the path of diplomatic negotiations and dialogue.”

Blinken “stressed the importance of a strong collective response to condemn Russia’s invasion and call for an immediate withdrawal and ceasefire.”

India has so far refrained from condemning Russia’s actions in Ukraine and in a statement in the Security Council on Wednesday night, just as Putin ordered Ukraine’s invasion, India’s Permanent Representative to the UN Ambassador TS Tirumurti expressed “deep concern” over the developments, which if not handled carefully, may well undermine the peace and security of the region.

Ahead of the UNSC vote, minister of foreign affairs of Ukraine Dmytro Kuleba said in a tweet that in a call to Jaishankar, he asked “India to use all influence in its relations with Russia to force it to cease military aggression against Ukraine. Urged India as a non-permanent UNSC member to support today’s draft resolution on restoring peace in Ukraine.”

The resolution also said that Russia “shall immediately, completely, and unconditionally withdraw all of its military forces from the territory of Ukraine within its internationally recognised borders.”

The resolution said Moscow “shall immediately and unconditionally reverse the decision related to the status of certain areas of Donetsk and Luhansk regions of Ukraine.”

A senior Biden administration official had said a day before that Washington was putting forward the resolution “with every expectation that Russia will use its veto” and in doing so, “they will underscore their isolation.”

“First, of course, we expect that Russia will use its veto. And in doing so, they will underscore their isolation. We’re not going to abandon our principles; we’re not going to stand by and do nothing. It’s important that we send a message to Ukraine, to Russia, and to the world that the Security Council will not look away,” the official said.