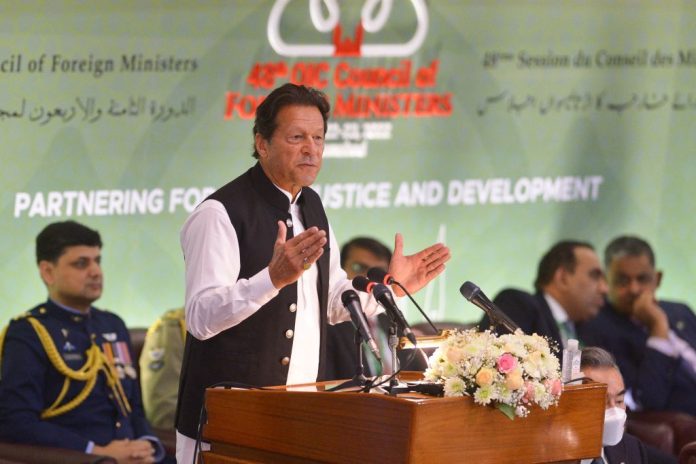 FOREIGN ministers of Muslim nations began meeting in Pakistan on Tuesday (22) as the country’s leader trumpets his Islamic credentials while at the same time battling the most serious challenge to his rule in four years.

The Organisation of Islamic Cooperation (OIC) is meeting in Islamabad with an ambitious agenda that seeks approval for more than 100 declarations, including aid for financially strapped Afghanistan and support for the Palestinians and Kashmir.

The meeting is also attended by China’s foreign minister Wang Yi despite Beijing being criticised for its treatment of Muslims in Xinjiang province.

But as officials praise Pakistan prime minister Imran Khan for getting the United Nations last week to formally recognise Islamophobia as a global threat, the cricket star-turned-politician faces a no-confidence vote in the National Assembly.

In a hectic week on the political front, the country on Wednesday (23) also celebrates Pakistan Day, with a military parade and flypasts.

The theme for the OIC gathering is “Partnering for Unity, Justice and Development”.

Khan won office through an electorate weary of the two-party dynasties that have dominated Pakistan politics since independence – periods of power punctuated by military coups – but he seems to have lost that support, and perhaps the Army too.

“I think the army leadership must be extremely concerned seeing what is happening on the political scene at the moment,” said Talat Masood, a retired general-turned-political analyst.

Khan has called for a million of his supporters to rally in the capital to put pressure on dozens of National Assembly members who are reported to be considering voting against him.

The leaders of the two main opposition parties have also called for their supporters to gather, prompting authorities to declare most of this week a public holiday in the hope of avoiding conflict – particularly during the OIC meeting.

“It is dragging the country to chaos,” Masood said.

“It seems that the government and opposition parties are on a collision course. They don’t seem to solve the problems politically, and rather try to show their street power.”

The no-confidence motion is scheduled to be formally introduced on Friday (25) with a vote next week, but horse-trading is common in Pakistan politics and the rebels could well return to the fold before then.

“He has managed his own and allied political parties poorly,” political analyst Hasan Askari Rizvi said of Khan.

“It was his failure to keep the party and allies together that has brought him to this.”

Although Pakistan escaped the worst of the Covid-19 epidemic, the economy is in the doldrums with soaring inflation, a feeble rupee, and crippling debt.

The return of the Taliban to power in neighbouring Afghanistan has also provoked a resurgence of militancy in Pakistan – including the bombing of a Shiite mosque in Peshawar last month claimed by the local chapter of Daesh that killed more than 60 people.

With flaring domestic issues, Khan has tried to position himself on the international stage, but his insistence on continuing with a visit to Moscow last month as Russian troops invaded Ukraine perplexed even his most ardent admirers.

He was also one of the few world leaders to attend the opening of the Beijing Winter Olympics when others boycotted in protest at China’s human rights record.

There are several scenarios at play for Pakistan this week.

Khan’s PTI party is pursuing a court case against rebellious members that could force them to follow the whip.

Another tactic is for parties to, quite literally, hold lawmakers hostage and prevent them from voting or having a quorum.

And even if Khan does lose the vote, there will likely be a series of challenges both inside and outside the assembly.