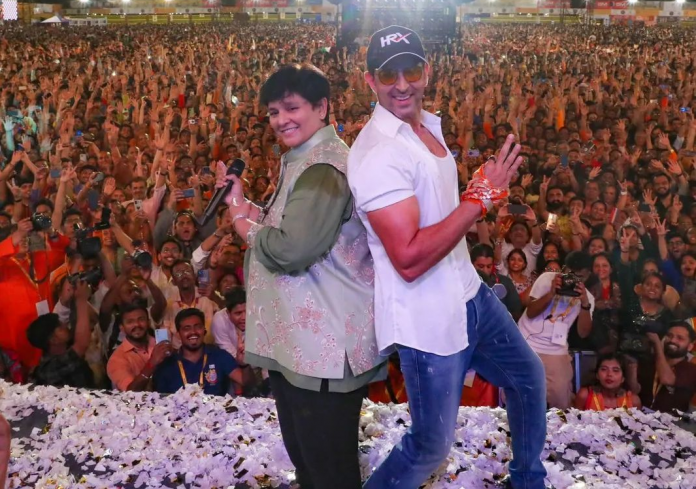 Bollywood superstar Hrithik Roshan, who can be currently seen in Vikram Vedha alongside Saif Ali Khan, celebrated the Navratri Maha Saptami with well-known singer Falguni Pathak at a Garba night event in Mumbai. The Kaho Na Pyaar Hai actor arrived at the event along with the writer-directors of Vikram Vedha, Pushkar & Gayatri, and producer Shibasish Sarkar.

Hrithik and Falguni danced on Gujarati Garba ‘Valsadi’ at the event. The singer took to her social media platforms to share pictures and videos of Hrithik dancing with her. “Vasaldi version by Hrithik Roshan. Navratri hain garba toh banta hain,” she wrote in the caption of her Instagram post.

As soon as Hrithik strode up to the stage, he greeted everyone in the crowd with, “Kasa kai Mumbai? Kem cho, maja ma?”

He then said, “Falguni ji main aapka bohot bada fan hoon. Kya aap mere saath 2 steps karengi. The veteran singer quipped that she cannot match steps with Hrithik like his film songs, but can definitely do some Garba steps with him. To which Hrithik requested her to lead and he followed her along with the audience. They danced on Roshan’s popular song ‘Ek Pal Ka Jeena’.