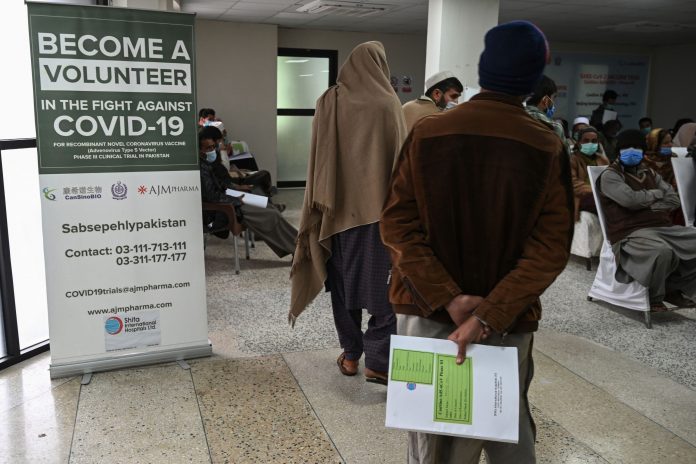 Intensive care units across Pakistan are nearing capacity as a second, deadlier wave of the coronavirus builds momentum and officials struggle to counter public indifference to the pandemic.

Several doctors told AFP on Wednesday (25) that hospitals are turning away suspected Covid-19 patients, with the potential for a major health care crisis increasing daily.

“The coming two weeks are critical and our situation is going to worsen,” said Qaisar Sajjad, secretary general of the Pakistan Medical Association.

“Around 95 per cent of the beds are occupied. Only a few hospitals still have capacity — but most of the hospitals are full and refusing to take more patients.”

Sajjad said the virus was proving “far more lethal” this time around. Authorities this week ordered the closure of educational institutes and banned indoor dining at restaurants.

The new outbreak has surprised Pakistan, where for months many have been saying the pandemic was done.

The government of prime minister Imran Khan, which never imposed the sort of sweeping lockdowns seen in wealthier countries, had boasted of controlling the virus but is again urging people to follow safeguards.

“Both the government and the nation should collectively fight the second wave, which is causing a rapid increase in cases,” Khan told reporters Wednesday.

Compared to neighbours Iran and India, Pakistan dodged the worst of the pandemic’s first wave, something health experts have said was due partly to the young population and the fact many Pakistanis travel little around the country.

Pakistan has confirmed more than 382,000 cases including over 7,800 deaths since the virus arrived in late February.

By contrast India, with a population five times the size, has recorded about 17 times more deaths.

Faisal Sultan, Khan’s special assistant on health, said the “death ratio” — the number of people with Covid-19 who die from the disease — was rising, and officials warn that more and more people are testing positive.

“The current wave of Covid-19 is more lethal,” Sultan said.

“The pandemic is fast spreading and we should all be concerned”.

Pakistan’s relative nonchalance toward the virus — and the government’s inconsistent messaging to stop it — was highlighted Saturday when several hundred thousand men massed in Lahore for the funeral of hardline cleric Khadim Hussain Rizvi.

The firebrand had died suddenly after suffering from fever and breathing difficulties, but no virus test or autopsy were performed.

Most mourners were not wearing masks and the government, which fears upsetting conservative Pakistan’s powerful religious right, said nothing.

Since mid-October, massive crowds have also gathered at opposition rallies in major cities including Gujranwala, Karachi, Quetta and Peshawar, with most attendees flouting mask rules.

“Coronavirus is at its worst right now in Pakistan,” Hayat said, urging the government to impose full lockdowns.