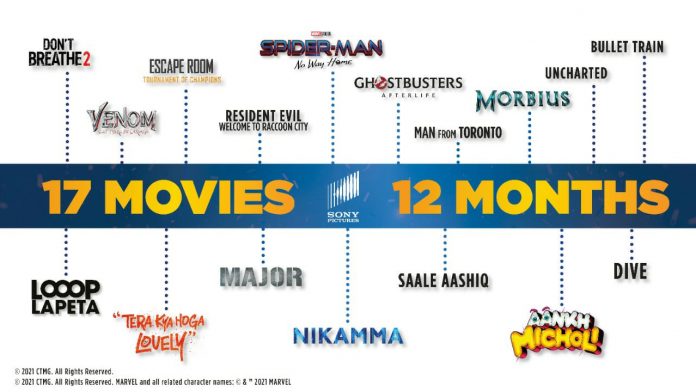 Sony Pictures Films India has announced its plans to release around 17 Bollywood and Hollywood films over the next one year. Some of the titles the studio is set to bring to theatres in the next few months include Bollywood and Hollywood biggies like the Taapsee Pannu starrer Looop Lapeta, Spider-Man: No Way Home and Venom 2- Let There Be Carnage, the studio announced on Monday.

Other films include Nikamma, starring Abhimanyu, Shirley Setia, and Shilpa Shetty, family entertainer Aankh Micholi, and Major, a film based on the life of Major Sandeep Unnikrishnan who was martyred during the 26/11 attacks.

“There has been huge disruption in the feature film landscape (over the past few months) and a serious shift in creative thinking has taken place for filmmakers to see what will work from a theatrical and OTT point of view,” Vivek Krishnani, managing director, Sony Pictures Films India said.

People will come to theatres if they get things that cannot be replicated on the small screen, Krishnani said, such as great visual appeal, action or horror.

“We have to create larger-than-life narratives because if people have to make the effort to go to theatres and pay for F&B, they must be given creatively rewarding content,” Krishnani said adding that theatre-going will continue to remain one of the big outings for families in India, other than eating out.