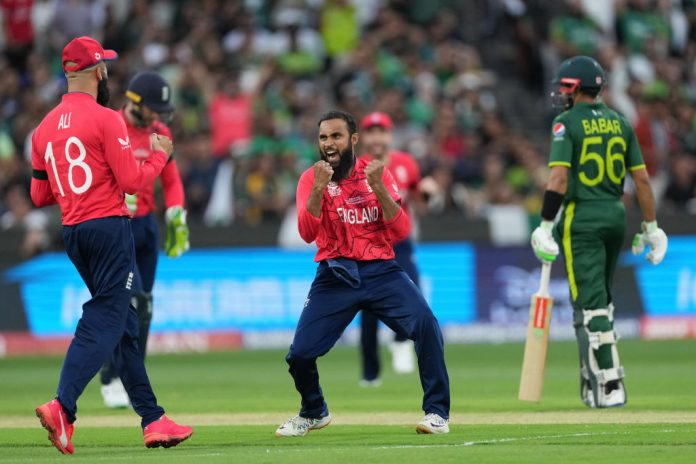 To have a member of one World Cup-winning squad is more than what a family wishes for. For Adil Rashid’s kin, witnessing him to be part of two is something out of this world.

The 34-year-old leg-break bowler from Bradford, Yorkshire, produced an eye-catching performance as England defeated a spirited Pakistan by 5 wickets in a thrilling final of the T20 World Cup at the Melbourne Cricket Ground (MCG) in Australia on Sunday (13) to clinch their second title since 2010.

However, the latest world title is the second that the Three Lions have won in three years after their maiden 50-over World Cup triumph at home in 2019 over New Zealand and Adil, like many other teammates, was a member of that squad led by Eoin Morgan.

The family of the man, who is of Pakistani descent like his teammate Moeen Ali, is relishing every minute since the gigantic success Down Under.

Adil’s elder brother Amar Rashid spoke exclusively to the Telegraph & Argus saying he never doubted the ability of the former throughout the tournament. The spinner took only four wickets in six games in the T20 World Cup but the way he choked top batters, especially from sides such as Sri Lanka, India, and Pakistan that are known for playing spin well, the feat could not be ignored.

“It is a proud moment for Adil and the family. We are all so chuffed,” he said.

“What he has achieved is amazing. He is a two-time world cup champion from Bradford. He is the first Yorkshireman to do that. It is so special.

“I always knew if they played to their potential they would win it. They will go down as one of the best teams in history.

“We all watched it at home. The house was ram packed – full of his brothers, sisters, nieces and nephews.”

In the semi-final against India at the Adelaide Oval, Rashid put the brakes on the opponent’s scoring despite the fact that the Indian side had some of the most brutal hitters. He also picked up the prized wicket of Suryakumar Yadav, who is known for toying with bowlers, at a crucial juncture.

In the final, Adil produced yet another gem of a performance. On a bowler-friendly wicket at the MCG, he left Pakistan batters frustrated and ended up claiming two scalps, including captain Babar Azam, Pakistan’s best batter at the moment. He finished with 2 for 22 in his four overs and Pakistan ended up reaching a total that was never going to be enough against a formidable England batting line-up.

Pakistan did well to fight back but an injury to their spearhead Shaheen Shah Afridi at a crucial moment and a match-winning unbeaten fifty from Ben Stokes ensured that England became the first side in the world to lift the World Cup in both 50- and 20-over formats.

After the victory, Adil told Sky Sports, “It feels good. I am so proud of the boys and everyone here. From the position we were earlier in the tournament – we had that belief and we came all the way.

“I think everyone was nervous but as long as we had Stokes out there and Moeen (Ali), with Livi (Liam Livingstone) to come, we knew we had the firepower to make it over the line.

“It is pretty hard to describe but we’ll cherish this moment. It doesn’t happen often. I’m sure this is something all of us will treasure for the rest of our lives.”

England faced uncertainty over qualifying for the semi-finals from the group stage once after they were beaten by Ireland in a rain-curtailed game and the game against Australia was washed out. But Jos Buttler’s side was quick to make a comeback and won two games in a row to make the semi-finals.

The rest was history.

But for Adil, there is something more to the story.

In the final of the 2016 edition of the T20 World Cup played at the Eden Gardens in Kolkata, India, he had featured in the England side but a magical batting from the West Indies’ Carlos Barthwaite saw the Caribbeans pipping the English to clinch their second title. Adil had bowled in that game, giving only 23 runs in four overs but yet the ending was not to his liking.

Sunday’s result was redemption for the Bradford man in a way as well.

Amar, who has worked with his cricketer brother over the last 12 years to help him better the game, told the Telegraph & Argus, “We have been with him since day one and seen him through his ups and downs.

“The way he has bowled this tournament has been unbelievable. He doesn’t always get the man of the match but his (bowling) spells win games.

“He bowled really well in the final. That maiden was huge and then he got one of the best batters in the world out, Babar Azam.

“What he has achieved is unbelievable. Without his performances in the semis and final, I don’t think England would have won the World Cup.

“England are the white ball kings and Adil has played an instrumental part.”

Adil had made his T20 debut in 2009, which was before England won their first world title, but after playing five matches that year, he appeared for England again in 2015, the year he made his Test debut.

Adil’s family will have to wait for some time before he returns home as England will be staying back in Australia for a three-match one-day international series against the home team. The spinner is expected to be back in Bradford only by December 5.

But the family will be waiting for a grand homecoming for Adil then.

“He has had a busy end to the year (playing so much cricket abroad),” Amar said, adding, “It is a bit different this time because he will be back in the winter but we will arrange some sort of homecoming.”

On his brother’s future plans after completing the game, Amar said, “If he wanted to retire, he could as a legend. But he is not going to just yet.”

Adil has just expressed a desire to put his name in the upcoming auctions for the Indian Premier League.