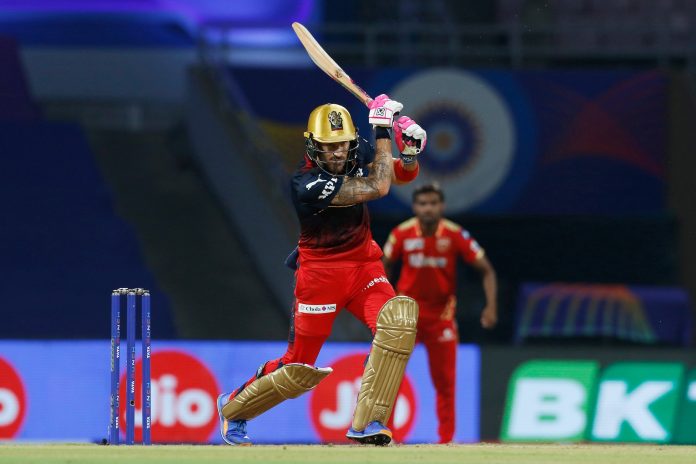 Faf du Plessis smashed 88 on his Indian Premier League debut as captain but his side Royal Challengers Bangalore went down to Punjab Kings in a high-scoring match on Sunday.

The South African veteran put on fiery stand of 118 off 61 balls with predecessor Virat Kohli, who hit an unbeaten 41, as Bangalore reached 205 for two after being put into bat first in the second match of the day in Mumbai.

Punjab, led by new skipper Mayank Agarwal, reached their target in 19 overs and won by five wickets with Shahrukh Khan, on 24, and Odean Smith, on 25 off eight balls, returning unbeaten.

Agarwal (32), Shikhar Dhawan (43) and Bhanuka Rajapaksa (43) contributed in the team’s winning start as they hunt for their maiden IPL title.

“We dropped Odean on 10 (one), and he’s a really powerful hitter. You need to hold on to your chances. The cliche of catches win watches,” Du Plessis said.

On his own batting and captaincy, Du Plessis said, “I am tired!”

“It was tough to start with the bat today. The first four overs, the ball was swinging, I was one off 10 I guess. Clutching the bat a bit hard but pleasing to get through it.”

The 37-year-old Du Plessis, who was signed by Bangalore for more than $900,000 in the auction, made the most of a dropped catch by Shahrukh on seven to raise his fifty with two sixes off Smith.

The former Test captain is an IPL veteran, making his debut for Chennai Super Kings in 2012 and a star of the side’s most recent and fourth title triumph last year.

He hit three fours and seven sixes in his 57-ball blitz before falling to Arshdeep Singh, but wicketkeeper-batter Dinesh Karthik kept up the attack in his unbeaten 14-ball 32.

The world’s most valuable cricket tournament has been expanded to 10 teams and 74 matches, but league games will be restricted to four venues in Mumbai and Pune with limited crowds because of coronavirus-related restrictions.