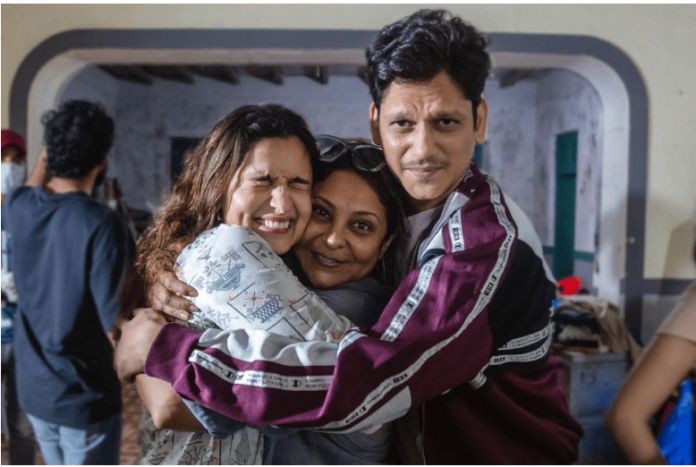 The upcoming Bollywood film Darlings, which marks Alia Bhatt’s debut as a producer, will have a direct-to-digital premiere on Netflix, skipping a theatrical release.

Bhatt, who began her acting career with Karan Johar’s college-caper Student Of The Year in 2012, today uploaded a video on Instagram wherein the cast of the film is heard in hushed tones discussing the premiere of Darlings on the streaming media giant.

Apart from bankrolling the film under Eternal Sunshine Productions and in association with Red Chillies Entertainment, Alia Bhatt also plays the female lead in the Jasmeet K Reen directorial. Such talented actors as Shefali Shah, Vijay Varma, and Roshan Mathew round out the cast. The film also brings together the hit pair of composer Vishal Bharadwaj and lyricist Gulzar.

Elated Alia Bhatt said in an official statement, “Darlings holds a very special place in my heart. It’s my first film as a producer that too with Red Chillies. We are very proud and happy how the film has shaped up and we hope it will entertain and engage audiences the world over.”

Director Jasmeet K Reen said, “I could not have asked for a better feature film debut —working with a pool of versatile and talented actors has been an absolute pleasure. I am delighted that Red Chillies and Eternal Sunshine are taking the film across the globe with Netflix.”

Pratiksha Rao, Director, Films and Licensing, Netflix India said, “At Netflix, we want to entertain our members with best-in-class films, across genres, made possible by collaborating with filmmakers who take big creative swings to tell diverse and compelling stories. With Darlings, we continue our long-standing partnership with Red Chillies Entertainment and are excited to be the home for Alia Bhatt’s first production. Darlings, by debut director Jasmeet K Reen, is a must-watch- a perfect storm of a riveting plot, fresh storytelling brought to life by powerful performances.”

Apart from Darlings, Alia Bhatt has a few more exciting projects on her plate. She is waiting for the release of the much-delayed fantasy adventure drama Brahmastra, which marks her first on-screen project with her husband Ranbir Kapoor. The Ayan Mukerji directorial also stars Amitabh Bachchan and Mouni Roy in lead roles.