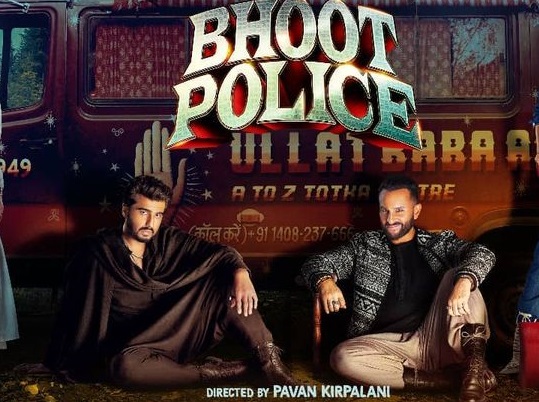 Buoyed up by the terrific response that the film has been receiving ever since its premiere on Disney+ Hotstar, producer Ramesh Taurani has decided to turn Bhoot Police into a franchise. Saif Ali Khan and Arjun Kapoor, who played the lead characters in the horror-comedy, are set to return as ghost hunters for Bhoot Police 2. Bhoot Police also featured Yami Gautam and Jacqueline Fernandez in lead roles. However, there is no update on their return.

A source close to Tips Industries informed a publication, “The template of Bhoot Police allows the makers to spin it into a franchise. While the makers had kept an open ending to hint at the possibility of a sequel, we hear that the team has already started early conversations on Bhoot Police 2. The idea is to continue the franchise bringing horror and humour together and making the ghost hunter face new challenges in different terrains of India.”

Bhoot Police is set to mark the second franchise for producer Taurani after three installments of the Race franchise. “It’s still some time for Bhoot Police 2 to take off. In fact, there is a high possibility of Race 4 happening before the horror comedy, as the scripting of the action thriller is already going on in full swing,” the source added.

Confirming the development, Taurani said, “Yes, we are definitely planning a sequel to Bhoot Police. The audience is enjoying the first part and I am looking forward to taking it forward with the team.”

Meanwhile, Saif Ali Khan next will be seen in Om Raut’s magnum-opus Adipurush and the official remake of the Tamil-language blockbuster Vikram Vedha (2017). Arjun Kapoor, on the other hand, has Ek Villain Returns in the pipeline.