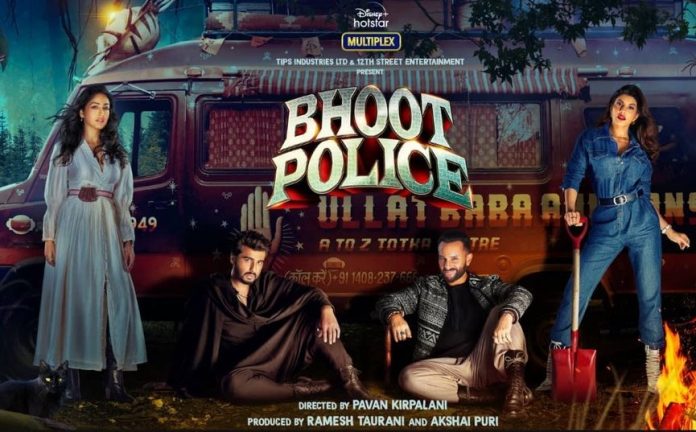 Making a horror-comedy is surely not an easy task; you need to make the audience laugh and scare them at the same time. Well, director Pavan Kirpalani and his team of writers have done a fantastic job in Bhoot Police.

From the first scene to the last scene, the movie will keep you hooked, and there’s not even a single dull moment in it. It has the perfect amount of thrills and chills, and there are many scenes that will make you laugh out loud. The dialogues in the movie are damn good, especially the one-liners mouthed by Saif and Jacqueline.

Talking about performances, Saif Ali Khan has proved his mettle in comedy films earlier, and in Bhoot Police also he is just excellent. Arjun Kapoor leaves an impact and has given a very confident performance. Yami Gautam is fantastic in her role. Jacqueline Fernandez’s performance is a big surprise here; she looks stunning in the film, and her comic timing is just perfect. Jaaved Jaaferi is good in his role, and Jamie Lever is fantastic.

The movie doesn’t have any songs apart from the track, Aayi Aayi Bhoot Police, which comes during the end credits. But, the background music is good and suits the film’s theme.

Overall, Bhoot Police offers the perfect amount of horror and comedy, and it’s an entertaining film. So, you should watch it on Disney+ Hotstar.