Home Arts and Culture Belle Scar and the beautiful beginning 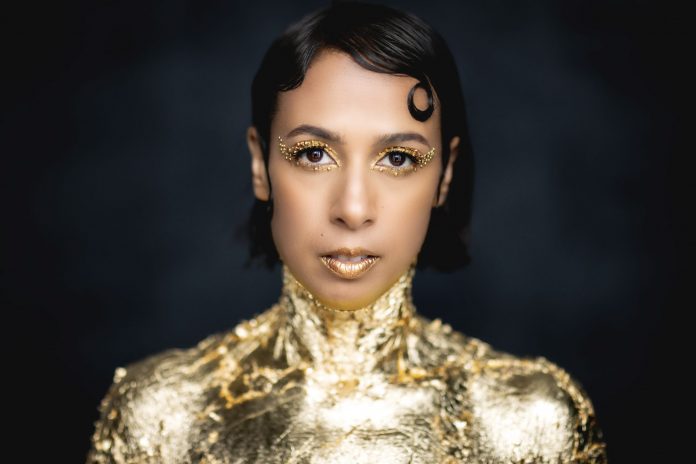 SINGER ON HER NEW SONG AND DEBUT ALBUM

Whether it is her voice, music, lyrics, live shows or distinctive look, there is an
interesting power in everything that Belle Scar does.

The acclaimed singer, songwriter, multi-instrumentalist, and producer from Montreal has been based in London for the last decade. She has used diverse influences, ranging from unique sounds to cinematographic moods, to create music filled with high drama.

This has resulted in musically rich songs like her wonderful latest release Where Do We Begin and epic live performances. The momentum generated by the top talent in recent years will carry her towards a debut album titled Atoms.

Eastern Eye caught up with one of UK’s best kept musical secrets to talk about her unique music, latest song, forthcoming album, and the influence of living in London.

What first connected you to singing?
I first started singing by chance in a band as a teenager when the band couldn’t find a decent singer and gave it a go. I was playing keys, writing poems and lyrics but hadn’t really sung before. It was only a few years later that I really started training my voice intensely and connected with it, and felt that this is what I’m supposed to do. It’s a powerful feeling and an amazing release of energy and creativity.

What has been your most memorable musical moment?
Being a musician means most moments are memorable, from having an idea and starting to write a song to the final versions of making an album. Playing shows with my new line up at the moment of a full band, strings and choir is pretty great. I organised a two-month tour all over Europe a few years ago, and that was a special adventure, and defined my move to London from Montreal.

What inspired your recent song Where Do We Begin?
Where Do We Begin is about maintaining one’s sanity in the fearful uncertainty of the present day. There’s lots to write about at the moment, with so many challenges we are facing, politically and socially, including the climate and economy. I wanted my lyrics to be honest and vulnerable without pretensions, like having a personal conversation with a friend. “I’m just a lonely soul dreaming of a better place in time, in my mind”.

Who are you hoping connects with your new track?
I’m hoping most people will connect to it. We all go through challenging times and are facing the same uncertainties. We all need to connect strongly to something meaningful and navigate this strange journey. It made me feel good to write this song, so I hope it makes people feel the same way when they listen to it. Where Do We Begin is available on all streaming platforms.

What can we expect from your forthcoming album Atoms?
It’s an album about beginnings and endings, change, and finding meaning in both the beauty and darkness that is life’s journey. I wanted to write something quite epic, poetic with lots of different layers, textures, and arrangements. I wrote all the music, lyrics, and choir arrangements. My husband, musician and producer Marc Olivier, wrote some fantastic string arrangements, as well as adding warm vintage guitar textures, and recorded and produced the album at Plastic Sound Studios. The album is presently getting mastered at Abbey Road Studios. It will be released in 2023.

How would you like to describe your music and sound?
Soulful, cinematic, and epic. It has some moody, trip hop, alternative and film scoring vibes. I think that my music is quite unique.

What inspires you as a singer-songwriter?
Life, transformation, art, science, philosophy, space, time, people and so much more inspire me.

How much has living in London informed your music?
There’s so much to get inspired from in London. I have seen so many amazing shows and exhibitions, and met many brilliant people from all over the world. London is a special city where you can be whatever it is you want and there’s always lots of opportunities to be inspired by daily.

How much does performing live mean to you and what has been the most memorable show?
Performing is such an incredible experience. It is a powerful connection within yourself, with your musicians and the audience. Playing at Glastonbury Festival and performing recently at Sadler’s Wells has been very memorable for me.

Who is your own music hero?
I’ve got many but if I have to choose a few then David Bowie, Beethoven, Ennio Morricone, Nina Simone, and Leonard Cohen.

What kind of music dominates your own personal playlist?
It depends in what mood I am in, but you will find some Billie Holiday, Nick Cave, Velvet Underground, Neil Young, Serge Gainsbourg and Beatles in there, with some classical, jazz and lots of music from the 1960s to the 1990s. Also, on occasion a new thing that is quite unique.

If you could master something new in music what would it be?
I think that I would love to bang on some drums properly.

Tell us something not many people know about you?
I play football three times a week in two women’s leagues.

Why do you love music?
I just can’t imagine a world without music. It’s the soundtrack of our lives and makes people experience something special, which we all need.
www.bellescar.com