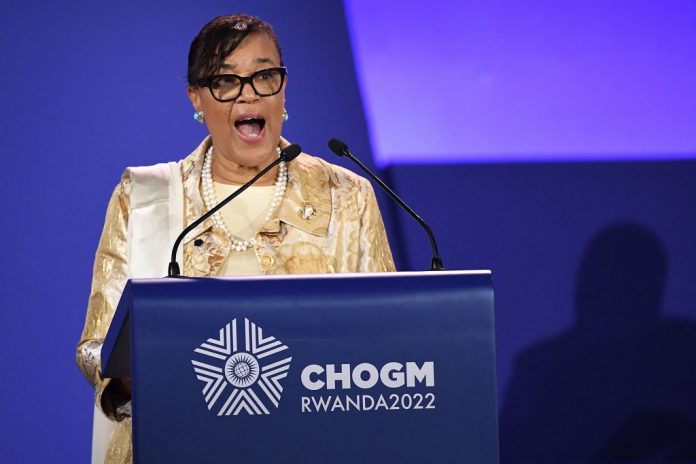 Baroness Scotland of Asthal has won a second term as the secretary-general of the Commonwealth despite British prime minister Boris Johnson’s support for her challenger from Jamaica.

Her re-election at the Commonwealth Heads of Government Meeting in Rwanda on Friday came amid her allies’ allegation that the UK government was “sowing discord” among Commonwealth nations.

The Labour peer’s rival and Jamaican foreign minister Kamina Johnson Smith conceded defeat and took to Twitter to thank those who backed her.

Lady Scotland had succeeded India’s Kamalesh Sharma as the secretary-general in 2016.

Born in Dominica in 1955, she moved with her family to London aged two. A prominent lawyer, she became a member of the British parliament’s upper House of Lords in 1997.

She then held various government roles under Labour prime ministers Tony Blair and Gordon Brown, including becoming the first female attorney general, a post that dates back centuries.

Her time in office as the secretary-general of the 54-nation club has been dogged by allegations of poor leadership, including over a lavish refurbishment of her official lodgings in London, the award of a lucrative contract to a friend and other scandals that have been widely reported in the British media. Scotland denies any wrongdoing.

Her term was supposed to finish in 2020 but was extended because the Commonwealth summit scheduled for that year could not take place due to the Covid pandemic. After a two-year delay, it is now taking place in the Rwandan capital.

Having served six years instead of four, she will now serve a second term of just two years.

In her speech delivered ahead of Friday’s vote, she had sounded confident about continuing in the role.

“I am determined that, when the role of secretary-general rotates to Africa two years from now, I will hand on the baton with a stronger, more effective, more powerful Commonwealth than ever before,” she said.