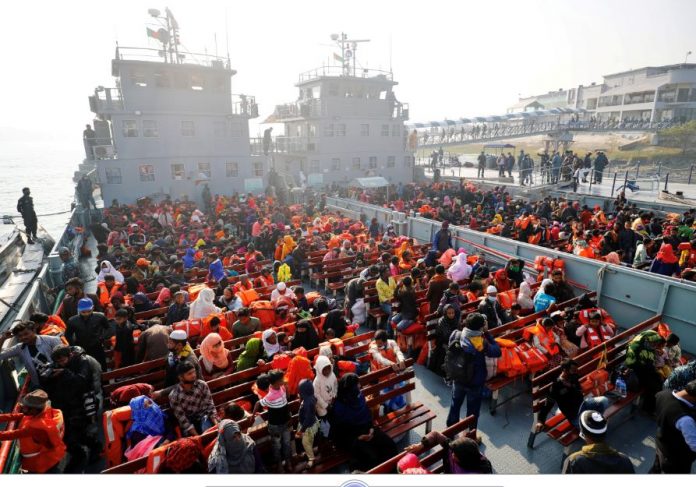 BANGLADESH started moving a second group of Rohingya Muslim refugees to a low-lying island in the Bay of Bengal on Tuesday(29), despite opposition from rights groups worried about the new site’s vulnerability to floods.

The UN says it has not been involved in the relocation but urged the government to ensure no refugee is forced to move to Bhasan Char island, which only emerged from the sea 20 years ago.

“We are ready to receive the new arrivals,” Navy Commodore Abdullah Al Mamun Chowdhury said from the island of the 1,804 Rohingya being moved in seven ships.

A first group of more than 1,600 Rohingya, members of a minority group who have fled from Myanmar, were relocated from their rickety camps near the Myanmar border to Bhasan Char earlier in the month.

The government has built a 12-km (7.5 mile) embankment to protect the island along with housing for 100,000 people. It dismisses the risks.

The government also says the relocation is voluntary but some refugees from the first group have spoken about being coerced to go.

“(A) lack of transparency in the consultation process with refugees, and allegations from within the community about cash incentives being offered to Rohingya families to relocate to Bhashan Char as well as use of intimidation tactics are making the relocation process questionable,” the group said.

“The Rohingya people who have shifted there are very happy with the arrangement. Some evil groups are spreading negative propaganda,” he said.

Two Rohingya men on board one of the ships heading to the island from the port of Chittagong told Reuters they were moving to their new home voluntarily. One said he was joining relatives already there while the other was moving with his wife and six children.

“There is so much suffering and conflict in the camp,” said one of the men. “We are going there in the hope of a better life.”

Reuters is withholding their names given the controversy around the move among the community, with many keen to stay on the mainland.