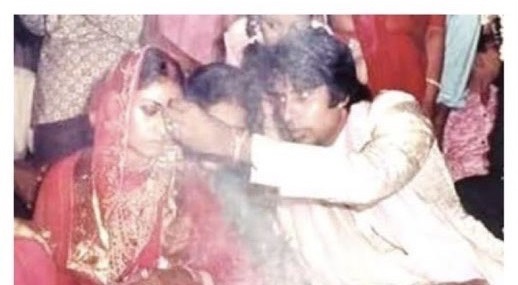 Legendary Bollywood actor Amitabh Bachchan on Thursday expressed gratitude towards millions of his fans who wished him and wife, actor-politician Jaya Bachchan on their 48th wedding anniversary. The power couple tied the nuptial knot on June 3, 1973. They have two children –author Shweta Bachchan Nanda and actor Abhishek Bachchan.

“Thank you all with immense gratitude for the wishes for Jaya and me on our wedding anniversary… June 3, 1973… now 48 years,” he wrote on his blog. “Your wishes and your gracious words have been most moving and filled with love for us and we truly appreciate them. For today and now,” he added.

Bachchan also shared a few unseen throwback pictures from their wedding ceremony on Instagram last night. Many celebrity friends and colleagues of the duo dropped their comments on his timeline and extended wedding anniversary wishes.

Amitabh Bachchan and Jaya Bachchan have worked together on a string of successful films. Some of their most memorable films together include Zanjeer (1973), Abhimaan (1973), Sholay (1975), Mili (1975), Chupke Chupke (1975), Silsila (1981), and Kabhi Khushi Kabhie Gham (2001), among others. The couple was last seen together in a special appearance in filmmaker R Balki’s Ki And Ka (2016), starring Kareena Kapoor Khan and Arjun Kapoor in lead roles.

Meanwhile, Senior Bachchan is presently waiting for the release of his upcoming films such as Chehre and Jhund. Both films are ready but are yet to find a way into theatres due to the ongoing second wave of the coronavirus pandemic in India.

The superstar has several other exciting projects in the pipeline, including Brahmastra with Ranbir Kapoor and Alia Bhatt, MayDay with Ajay Devgn and Rakul Preet Singh, Goodbye with Rashmika Mandana, and The Intern with Deepika Padukone.