Home Enterainmnet stories ‘Aashiq Hoon is a tribute to the music of the 90s:’ Music... 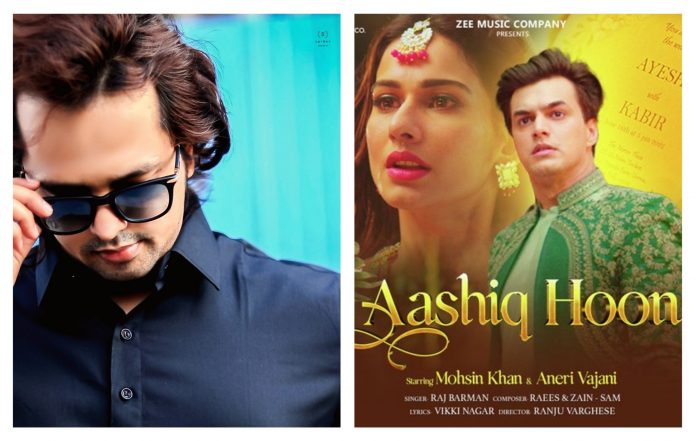 Music composer Zain Khan is currently on cloud nine as his latest single “Aashiq Hoon,” featuring popular television stars Mohsin Khan and Aneri Vijan, has turned out to be a massive success. The song has been trending at No. 1 on YouTube for several days now and has already clocked more than 8 million digital views.

In a candid conversation with Eastern Eye, Zain spoke about the riotous success of the song, the pressure of delivering a bigger hit next time, and much more. He also dropped some interesting details about his much-anticipated song with singing sensation Arijit Singh.

What kind of response have you been receiving for your latest song Aashiq Hoon?

By God’s grace, the song has been receiving a stupendous response from the audience. It has been trending on YouTube ever since its release. And today, I got to know that it’s trending at No. 1 on YouTube. It is indeed a great feeling that I cannot describe in words.

The song has the ’90s vibe. Was it a conscious decision to compose it like that?

I am a ’90s guy and I wanted to transport the audience to that era that witnessed an avalanche of melodious music and some of the best songs ever produced. We still sing and listen to those songs. Why? It is because that era has a different feel to it altogether and songs created back then had so much melody, so much soul in them, something which is lacking today. Be it the soundtrack of Jo Jeeta Wohi Sikander or all the films by Mahesh Bhatt Saab, music used to be so rich in those movies. So, you are correct; I purposely wanted to create something that makes us relive that era all over again. You cannot forget your formative years. We all explored those songs on TV and they are still a part of our life. Aashiq Hoon is a tribute to the music of the ’90s.

Do you feel the pressure of delivering a much bigger hit next time?

I think I have gotten over that pressure long before. My debut song “Pallo Latke” was such a huge hit. It has garnered more than 500 million views. I think I am the first composer to achieve that feat with the debut song itself. Technically, my second song should have crossed more than 500 million views, but that did not happen. So, that pressure dissipated after the release of my song itself. Now I don’t have any pressure. I just want to deliver good music and entertain my audience. Just it.

If I am not wrong, you have recorded a song with Arijit Singh. When is it coming out?

Yes, I have done a song with him. It will be a part of one of the films produced by ZEE Studios. I cannot reveal much about it at the moment. It has been penned by Liaqat Jafri. What more I can tell you right now is that it is a sad romantic song about a boy who yearns for the love of his life. He is breaking and failing, but he gathers himself again and tries one more time. He just does not give up. I would call it a ‘divine love song’.

How did this collaboration happen?

Arijit has become very choosy lately, we all know that. He is not taking up many songs, you know. He once said to me, ‘Zain, I have sung so much that now there is nothing much left to explore’. He is not running after more and more projects. Even if he sings two songs a year, they become chartbusters.

So, he said, “Zain, why cannot we try something that I have not done before?” After several sleepless nights, we finally cracked a song. It’s a very beautiful song. I am quite hopeful that all the listeners will be able to listen to it this year only. Fingers crossed!