Home Arts and Culture A great love for Shreya Ghoshal 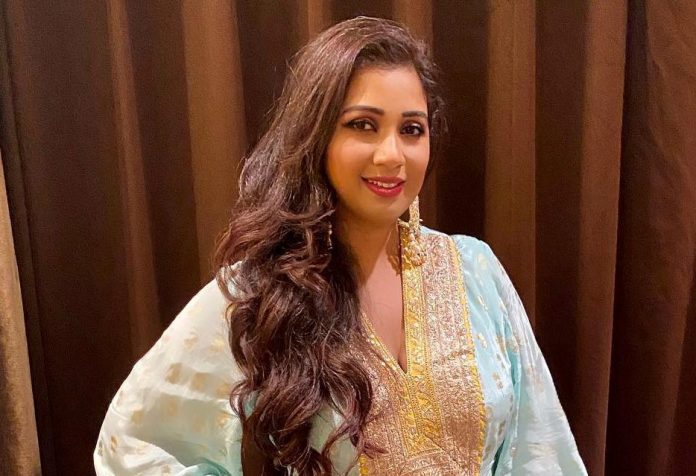 SHREYA GHOSHAL returns to the UK this month with huge concerts at Utilita
Arena in Birmingham on March 25 and OVO Arena Wembley in London on March 27.

The undisputed queen of Indian film music will also turn a year older on March 12. Eastern Eye decided to look ahead to the shows and celebrate the sensational singer’s 38th birthday by getting some of her most dedicated fans on Twitter to tell Eastern Eye why they love her.

@AFanOfShreya: She is the one who taught me to believe in myself, to be the real me and work harder.

@Ajay_SGian: I have faced severe health issues but listening to her music faded away all the pain when medicine was not able to. After my mum, she is the only person who created such an impact.

@anila_4: Among a hundred reasons, what entices me most is her hunger for novelty, experimentation and self-introspection for bettering her previous outing while remaining rooted, sincere and unadulterated to her art.

@ashes_and_flame: I love her humility, simplicity, and sense of purity. She has a connection with the universe and that’s why she sings the tune of the heart.

@Dreamyboyy_: I love Shreya because of her heavenly beautiful voice, and her dedication and devotion for music. For being so down to earth, humble, and a kind human being.

@janani_111: There had been days when I wanted to quit, but Shreya literally held me from afar and pulled me out of chaos. Her music healed me and made me a better person. Forever grateful to her for helping me sail through the storm. 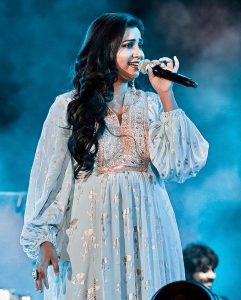 @kanikaS__SG: I love her for always being honest, standing by what she believes in, being kind and being so beautiful inside and out. For never giving up and being an absolute queen. She is so inspiring and makes me want to be a better person.

@MaramAlYaseen1: I have many reasons to love her. She is like medicine to me. Really, not a day goes by without hearing her voice. Her songs are just the best. It’s like life to me. It’s a whole world.

@PranavPd2: I have never seen an artist like her. She has ruled Indian music since 2002, but never behaved like a celebrity. She treats fans like family members and cares about us. We all love her as a person more than a singer.

@PritiMenon85: She can sing effortlessly in every single language and that’s what makes her special.

@Rithika_SG: I love her humble, down-to-earth personality, irreplaceable nature and surreal voice. She is pure, kind, beautiful from the inside and out but also is the sweetest singer. Shreya Ghoshal is an emotion and inspiration. She means the world
to me.

@RubyLama6: Shreya Ghoshal literally saved me last year. Her songs were kind of an escape from reality for me, which I needed most. She is a saviour, and I am indebted to her.

@SGxflicker: Shreya Ghoshal’s personality as a singer and kind-hearted human is inspiring. She has stuck to her own ethics and principles and never let anyone or anything compromise her quality of work, from such a young age.

@ShreyaComa: Loving her feels like taking care of my heart; it is important and inevitable. Not only me, but each of us who loves her is fond of the way she is, other than her music. She’s an angel. Her aura, words, thoughts and presence are like sunlight.

@shristi_SG: She heals me every time and unites the world with her presence.

@shriyadg: Love how she continues to be the girl-next-door, rooted in humility despite her success. She is the most genuine and hardworking person I have come across. Her innocence and craziness also makes her super relatable to fans.

@SonaSsg: I always adore her thinking, honesty, loyalty, humbleness, and dedication towards work. A musical nightingale, who gifted us each diverse flavours of music. She is an inspiration.

@srinivas786: Not only Hindi, she sings in any language, whether it’s Telugu, Tamil and Kannada. She sings with perfect pronunciation and with full dedication. She gives her 100 per cent to every song she sings.

@Surma_SG: Becoming a Shreya Ghoshal fan is an achievement in itself I believe! I love her for her voice, charming personality, and honesty in the music field. Her never compromising nature is so inspiring! She’s so down to earth, which makes her more loved among all.

@Vanshijain20: Shreya Ghoshal isn’t just a name to me, it’s an emotion. She is my love, heart! I love her for her humbleness and purity. She is outside what she is inside. Her vocal swipes away all my worries.